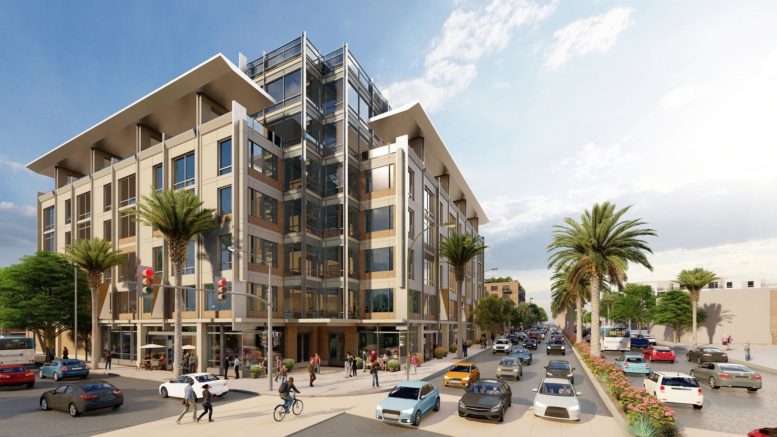 Pasadena City Council has approved a senior housing project for construction at 555 Arroyo Parkway in Pasadena. The project proposal includes the development of a building complex offering senior housing and medical offices.

Edgewood Realty Partners is the project developer. Adept Urban is responsible for the designs.

Named The Affinity, the complex will rise just south of Whole Foods. Plans call for a roughly 135,000-square-foot medical research building, accompanied by and up to 95 independent senior apartments. Sunrise Senior Living will be operating the apartments.

Architectural plans showcase a facade featuring a restrained contemporary design, with an exterior of brick and metal. Setbacks on the upper floors would provide amenity space for occupants of the residential and office buildings.

Besides the new construction, Edgewood also intends to retain and preserve two historic structures fronting Arroyo Parkway as a combination of retail and restaurant space. Likewise, the existing Whole Foods Market at the northern corner of the site is also slated for upgrades.

Construction is all set to begin in early 2023 and conclude over a single 34-month period. The project site sits midway between the L Line’s Fillmore and Del Mar Stations, and to the east of Huntington Hospital and a number of upcoming medical office complexes.

Be the first to comment on "Senior Housing and Offices Approved At 555 Arroyo Parkway, Pasadena"

Lofts Topped Out At 711 Walnut Street In Playhouse District, Pasadena