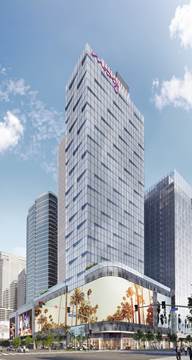 A hotel tower has topped out in downtown Los Angeles. The project proposal includes the development of a 37-story structure consisting of two Marriott hotels with onsite amenities.

The tower will consist of two Marriott hotels: Moxy Los Angeles and AC Hotel. Moxy hotel will offer 380 rooms, and AC hotel will offer 347 rooms. The new 37-story tower will also feature spaces for meetings, events and a dozen new food and beverage options. The mixed-use building will yield an area of 600,000 square feet. The property will also include over 22,000 square feet of premium digital and static signage, featuring the largest continuous full-motion digital display on the West Coast. Over 8,000 square feet of ground-floor retail space will also be offered.

With 65,000 square feet of meeting rooms, restaurants, bars, and nightlife throughout, the Moxy and AC hotel will become a central entertainment and cultural hub within this vibrant central Downtown neighborhood. The development will feature a 6,000-square-foot landscaped pool deck and an unprecedented offering of 12 all-new restaurant and bar concepts designed by Basile Studio. On the 34th floor, AC’s sky lobby will feature a garden-like terrace bar with panoramic views overlooking Downtown Los Angeles. The hotels will include 13,000 square feet of meeting space also designed by Basile Studio.

The tower is slated to open in late 2022. The property is located in the heart of downtown Los Angeles, directly across the street from the LA Convention Center and Staples Center, on the corner of West Pico Boulevard and Figueroa Street.

Lightstone is one of the most diversified privately held real estate companies in the United States. Moxy Hotels is Marriott International’s new millennial-focused brand that debuted in September 2014. AC Hotels by Marriott celebrates the beauty of classic modern design with its European soul and Spanish roots.