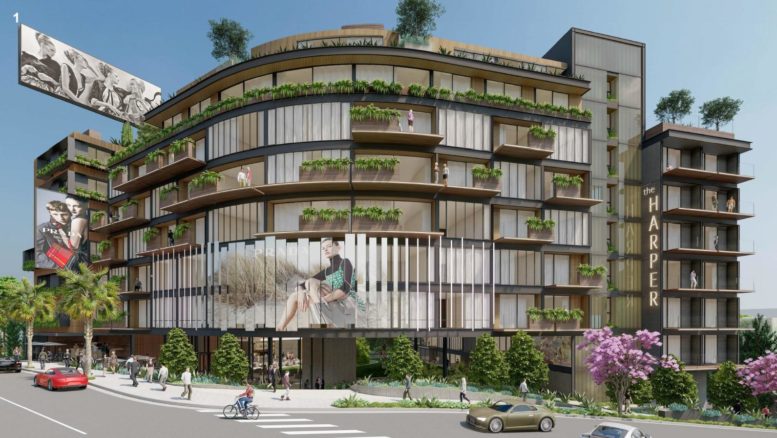 A new mixed-use project has been proposed for development at 8240 Sunset Boulevard in West Hollywood, Los Angeles. The project proposal includes the development of a hotel-housing complex. The project will replace two small office buildings and a surface parking lot.

Named The Harper, the latest hotel and housing complex planned for the Sunset Strip will bring a new hotel featuring 167 rooms and 45 apartments, restaurants, shops, and various onsite amenities. The buildings will be seven and nine stories high.

The new apartments will be built as a mix of one-bedroom and two-bedroom units. The apartment complex will have nine low-income affordable units in addition to 36 market rate units. The residential section of the property will feature a private courtyard for residents, with most units designed with at least two faces of exposure to permit natural lighting and cross ventilation.

The new hotel, in addition to guest accommodations, will feature 3,121 square feet of lobby space, meeting rooms, and service areas. Onsite amenities include a rooftop pool deck, a cafe, a courtyard, and other lounge and garden areas shared with residents.

Commercial spaces include 7,000 square feet of indoor space, located at street level and on the eighth floor, as well as outdoor dining areas. 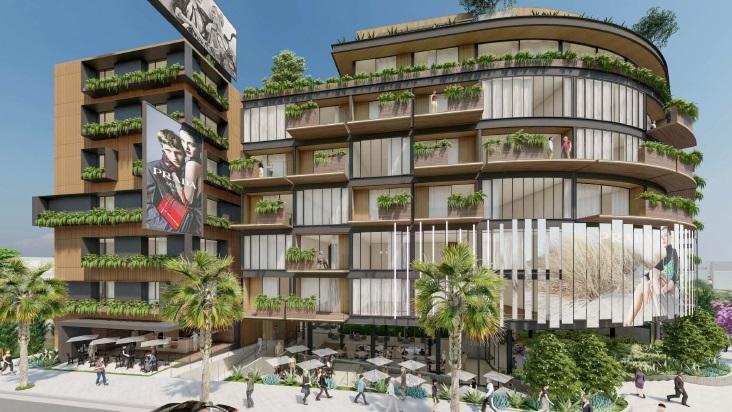 Renderings reveal a curved facade designed in glass, featuring a floating front courtyard with outdoor seating open to the Sunset Boulevard streetscape. An interior open-air courtyard and oculus will open to the sky. The complex will showcase landscaped spaces. The hotel hangs above the street level, both on Sunset Boulevard and North Harper Avenue. Digital signs are also proposed for the exterior of the building.

That proposal awaits approval of project entitlements by the City of West Hollywood. Construction of The Harper is expected to occur over a 30-month period commencing in June 2023.

Be the first to comment on "Hotel-Housing Complex Proposed At 8240 Sunset Boulevard, West Hollywood, Los Angeles"